The mix-and-match project makes use of many Spine features, including skins, skin bones and constraints, meshes, IK, transform constraints, and path constraints.

Many applications and games allow their users to create custom avatars out of many individual items, such as hair, eyes, pants, or accessories like earrings or bags. The mix-and-match project shows some best practices for such scenarios.

The project contains many separate skins, each representing an individual item like pants or a bag, to facilitate the creation of custom avatars at runtime.

Folders are used to organize the skins making up the items that compose a character.

Some items, like the dress, contain skin bones and constraints. 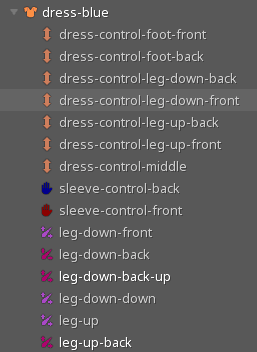 Various skin combinations can be viewed by pinning the desired skins in the Skins view.

The 2.5D effect on the face is the result of several bones and meshes being influenced by two main bones, head-back-control and head-control, where one is constrained to the other using a transform constraint with a translate mix set to -100. 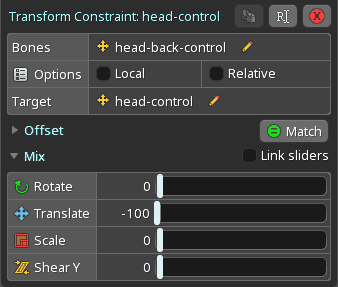 This results in the target bone moving in the opposite direction of the other when applying translation.

Weighing a mesh to these two bones that move in opposite directions makes it possible to add a depth effect, as illustrated in the Cube tip.

Additional depth is added by constraining bones for eyes, mouth, nose, and other facial features to the bone head-control as well. Using a lower translate mix, for example 20, lets these bones follow the target bone at a slower speed, producing slight drag to emphasize the depth of the face. The same method is applied for the hair around the face and the hat.

The character's limbs use the same rigging process used for the Stretchyman project. Images making up the limbs were drawn straight to facilitate nicer bending in Spine. 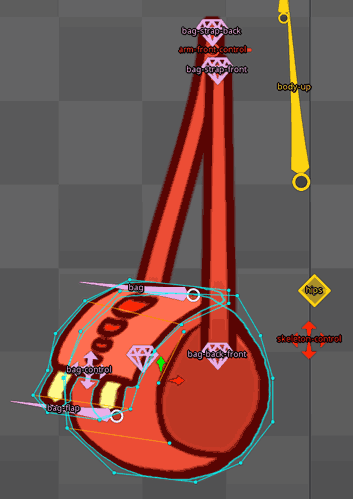 Similarly, the bones bag-back-down and bag-back-front keep the straps attached to the bag itself through mesh weights.

The bag bone is the parent of all the other bag bones and controls the rotation and overall position of the bag.

The bag-control bone is used to add depth to the bag. The meshes under the bag-base and bag-top skin placeholders are weighted to this bone in such a way that moving the bone will distort the meshes to simulate perspective. To make the effect easier to control the bone is positioned at the point that is furthest away in the perspective view of the bag. To complete the illusion of depth, the back-bag-down bone, which controls parts of the back strap, is also parented to the bag-control bone.

Occasionally the flap of the bag needs to detach from the rest of the bag. This secondary motion is added through the bag-flap bone, to which the bag-top mesh is weighted.

The front circular side of the cylindrically shaped bag acts as a pivot for the perspective distortion. All the involved meshes have been weighted in such a way that parts of the bag further away from the viewer move faster than those closer to the viewer.

An important aspect is the order of the bones used for weighting the bag-top mesh, as can be seen in the Weights view. This ensures that the triangles most influenced by the bag-flap bone are drawn on top of triangles most influenced by the bag-control bone. Controlling the triangle draw order allows for a wider range of movement without incorrect overdraw.

The remaining three meshes under the backpack bone (backpack, backpack-pocket, and backpack-up) are also influenced by both backpack and backpack-control bone to add perspective distortion.

Placing such elements hidden in the setup pose can be cumbersome. Instead, the backpack-control bone was moved to a position where the backpack-up mesh should be visible in animate mode. Next, Update bindings was used to bind the mesh to the bone, without having to edit the setup position of the bone.

The skeleton includes two differently styled hats. Since their setup is the same, we'll only review one of them here.

The hat consists of one mesh and 3 bones. The hat-base bone allows to move the hat independently. The hat bone bends the hat, while the hat-control bone add depth and slightly follows the 2.5D face control.

To create an easily bendable hat, the hat mesh was divided into horizontal rows with 5-6 vertices. This creates a conical topology with just enough vertices to be able to model realistic bending and distortion. 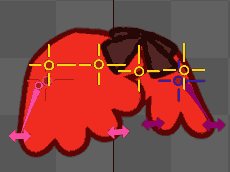 The red cape illustrates how to create a flexible rig that follows body motions, while making it easy to add secondary motion, all without cumbersome manual mesh deformations or bone transformation keying.

The cape is composed of 2 meshes, 1 region, and 10 bones. The two meshes make up the shoulder parts of the cape. The region constitutes the ribbon.

Special care was taken to ensure easy control of the meshes' deformation behavior. The lace at the bottom is partitioned into a strip of 5 sections, preserving the shape of each individual part. For better deformation behavior of the vertices at the top edge, a vertex was placed to match the position of the shoulder bone. The lowest edge of the outer part of each mesh is also divided into 3 sections to smooth the bending where most of the secondary motion will take place.

The mesh cape-red-up is bound to four bones: body-up for the parts that don't need to move because they are attached to the body, cape-red-front-outside to control most of the secondary motion, cape-red-front-inside to control the inner part of the cape separately, and shoulder-front to fix the shoulder rotation. The same approach is used for the cape-red-down mesh.

Additionally, the bone shouder-front-transform and its child shoulder-front help the cape mimick the rotation of the arm. This is done through the transform constraint shoulder-front. Without this constraint, rotating the arm all the way up causes the shoulder to enter the body instead of creating volume from the contraction of the muscle. See the shoulder tip for an alternative way of handling shoulder rotation. 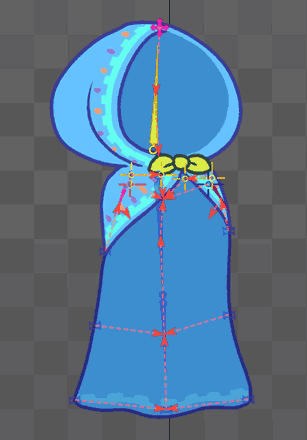 The blue cape is composed of 6 meshes and 16 bones.

The upper part is composed of 2 meshes: cape-blue-up-front and cape-blue-up-back, which are influenced by the body-up bone to keep them in place at the bottom, by the head bone in the mid-section, and by the cape-control bone at the top of the head to allow the cape some freedom of movement. The influence of the head-control and head-back-control bones adds depth to the cape. To guarantee a nice seam between the top parts of the two meshes, each mesh has vertices at the same location and with the same weights as the other mesh.

The shoulder parts of the blue cape follow the same principle that was applied to the red cape: big movements are created through the cape-front-rotator and cape-back-rotator bones, while smaller adjustments are done through the cape-blue-up-front and cape-blue-up-back bones. The shoulder parts stay attached to the body by being bound to the body-up bone. 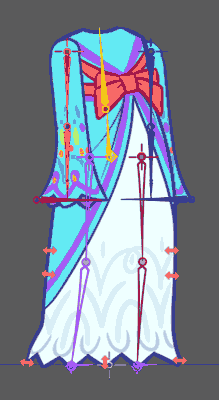 The long dress consists of three meshes: body-dress, sleeve-front, and sleeve-back. The upper half of the body-dress mesh is weighted to the body-up bone to stay attached to the upper body. The lower half is bound to a series of smaller bones, all parented to the skeleton-control bone. These smaller bones follow the legs of the skeleton through a series of transform constraints.

As with other clothing items, having a separate set of bones to control the dress makes animating follow-through and secondary motion a lot easier. Instead of having to manually animate every single weighted bone, adjusting the mix of a constraint is generally enough to achieve effects like following or ignoring the movement of the skeleton's leg bones. 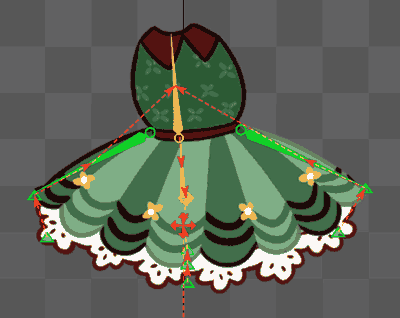 The green dress is made up of 2 meshes for the 2 skirt layers, and an image for the top body part. The general movement is done through the body-down and body-up bones, which serve as the parents for skirt-specific bones.

You can follow the creation of this project in the videos below. A full index of the streams and the original project files can be found in our Spine Twitch archives.

The project file that you can download from this page as well as being shipped with Spine is an enhanced version that makes use of new Spine Editor features such as skin bones.